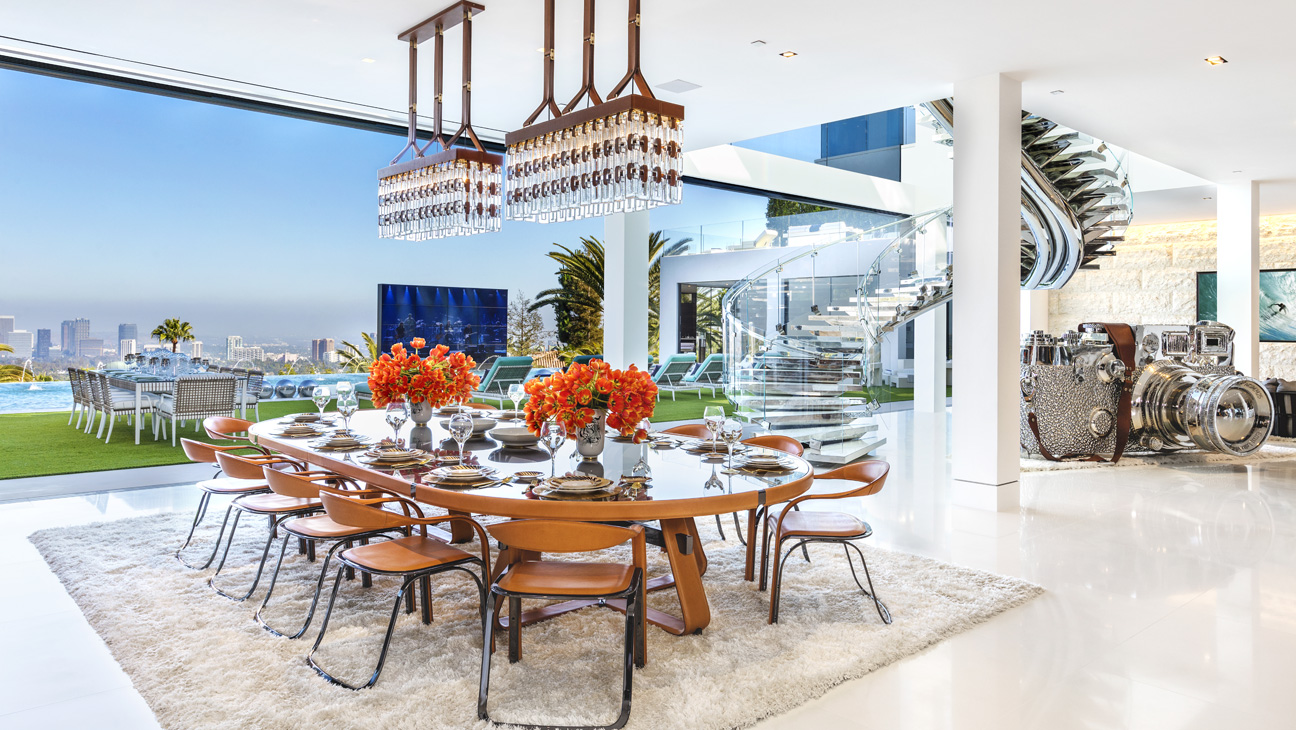 This article was originally posted on The Hollywood Reporter.

“Come on! This is f—ing nuts, right?” asks developer Bruce Makowsky as he stands on a deck with a 280-degree view of Los Angeles, showing The Hollywood Reporter what has been colloquially known as a “million-dollar view.”

Turns out this particular view is a tad more expensive.

Makowsky, who sold Swedish video-game billionaire Markus Persson a Beverly Hills mansion for $70 million in 2016, just put the finishing touches on a $250 million spec home in Bel Air. If that listing price is met, it would up the ante for a U.S. luxury home sale by more than $100 million from the $147 million that was paid for an East Hampton pad in 2014.

At 38,000 square feet, the home spans four levels, has 12  bedrooms, 21 baths, seven staffers, three gourmet kitchens, five bars, two commercial elevators, a massage studio/wellness spa, a fitness center and a James Bond-themed, 40-seat Dolby Theatre. The main outdoor deck features an 85-foot Italian glass infinity pool, a swim-up bar and a pair of mini Sea-Doos and a small catamaran. At the flip of a switch, a massive outdoor hydraulic theater-sized screen emerges, the aim of which, according to Makowsky, is to bring the Hollywood Bowl to Bel Air.

From Private Islands to Private Jets: A Brief History of Hollywood Blinging

Impressed yet? Well, for those still waffling on the quarter-of-a-billion-dollar price tag, there is more. Much more.

Below the infinity pool is a sprawling auto gallery with more than $30 million in cars including a baby Formula 1 race car that goes from zero to 60 mph in 2.8 seconds. There are Lamborghinis, Ferraris, Bentleys and at least a half dozen motorcycles — including a “first of firsts” electric Sora superbike.

Among the 130 art installations are chrome sculptures of skateboards and guns, an interactive digital work that stars Disney’s Seven Dwarfs and a champagne pinball machine. Next to the bowling alley is a massive $200,000 candy wall, which evokes Willy Wonka, the Golden Ticket and the hope that — just maybe —Gene Wilder isn’t really gone.

Several tons of breathtaking stones and marbles (50 different types) flown in from Verona, Italy, adorn the bathrooms; guests entering from the sloping limestone driveway are met with a peculiar nod to the Reagan Era: The helicopter from the ’80s TV show Airwolf sits parked on a rooftop helipad (it’s a “sculpture,” says Makowsky, who notes that the helicopter is inoperable). Some of the home’s more subtle accents include Lamborghini wall clocks, Dom Perignon-filled fire extinguishers and Chanel bedding.

Before opting for life as a developer, Makowsky made a fortune selling handbags on QVC. After familiarizing himself with the mega-yacht culture of the Mediterranean, he came to the conclusion that the superrich were being underserved in their housing options. His basic premise was quite simple: If elite consumers were willing to spend $200 million on a yacht, then that should be the price tag for his next spec home.

“I don’t care if you have a $100 billion, if you walk into this house it is going to blow your mind,” he says.

Mind-blowing is one thing, wallet-opening is quite another.

Hollywood’s Private Jets: From Oprah Winfrey to Tom Cruise, Who Owns What

The local luxury real estate market ended very strong in 2016 with the sale of two separate $100 million homes, and according to Douglas Elliman’s Connie Blankenship, the market appears poised for another record year. “That super-high-end luxury market is showing no signs of slowing down. All signs are pointing to a healthy 2017,” she says.

Makowsky says he is working with Hilton & Hyland’s Branden and Rayni Williams and Rodeo Realty’s Ben Bacal and is under no illusions about how tiny the sliver of the population is that could even dream of affording this house: He estimates there are around 3,000 potential buyers worldwide.

This article has been reposted from Framework. Your real estate agent can make or break your...